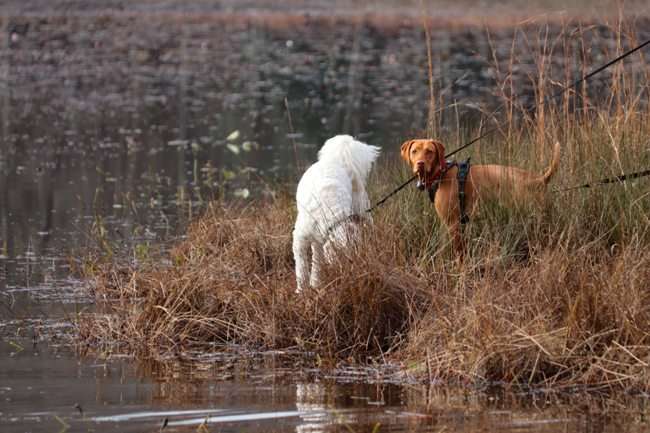 What is the history of the first duck hunting dog breeds? According to many researchers, their ancestors were dogs specializing in catching waterfowl. These dog breeds went through a long evolutionary period and became the mighty dogs they are today.

Each dog breed has its unique characteristics and surprising secrets. Go deeper into these amazing dog breeds through this article below!

Our topic today is a well-rounded exploration list of the ten most dominant retriever breeds with a particular history and the distinct attributes of each. All these breeds are extremely gifted duck hunters and loyal pets in each family.

The Labrador Retriever has become the most well-known duck hunting dog breed in the U.S for over two decades. Although this breed is regarded as the highland game hunter, it is also a great pet in the family. This dog’s smartness and physical strength are outstanding. They are capable of swimming and resistant to harsh climatic conditions, too.

The Labrador Retriever originated in Newfoundland in the 1800s. Their ancestors were famous for their excellent performances in getting nets, buoys, ropes, or fishes. In 1917, the American Kennel Club first recognized Labrador Retrievers as a specific dog breed.

This large, strong, muscular dog breed developed for only one purpose: to catch waterfowl. At one time, each Chesapeake Bay Retriever had to catch up to one hundred ducks every day. After hunting, they will come back home to guard the owner’s boat and equipment.

Many people appreciate Chesapeake for both hunting waterfowl ability and loyalty. Nonetheless, Chesapeake often does not adapt to intense and heavy training, opposite to their lusty appearance.

Despite their smartness, they are sometimes a bit stubborn and aggressive, especially when their owners do not understand them. As a result, raising and training Chesapeake Bay Retrievers is likely a hassle for beginners.

The Golden Retriever is a well-known dog breed in the U.S for quite some time. Not only is it a brilliant hunter, but it is also clever, docile, and easy-going. This breed also owns a splendid coat of various colors.

However, many goldens were bred particularly for ornamental purposes and not for much use in waterfowl hunting recently. Therefore, duck snipers looking for reliable companions need to make sure the dog breeds they get are from professional and reputation addresses.

Duck hunters who often use small ships, boats, or canoes will likely need hunting dogs to turn an outing into a great adventure. The American Water Spaniel is a compact but very versatile hunting dog that is well-suited to such adventures. They are descended from English, Irish, and American mastiffs and curly-coated retrievers.

The American Water Spaniel is a good waterfowl dog with a tough physique and great intelligence. The breed’s weight often ranges from 25 to 45 pounds.

The Boykin spaniel is one of the few American retrievers. The breed initially originated in South Carolina. The Boykin Spaniel has a pretty small body yet can hunt both waterfowl and wild turkeys. Studies suggest that this breed’s origin comes from the American water spaniel, cocker spaniel, springer spaniel, and the Chesapeake Bay retriever.

In addition, they also have a pretty wavy coat with moderate curls and a strong, toned body. Boykin’s weight is about 40 pounds or less.

Curly-Coated Retriever is regarded as the oldest waterfowl dog breed. They developed it in England in the 1800s. People can distinguish this breed easily by its thick, warm, curly coat and graceful appearance.

Curly-coated Retrievers are extremely intelligent and respond well to well-rounded training exercises. Also, they can become your loyal companion anywhere and are reliable watch dogs.

Some accounts record that the Irish Spaniel arrived in the U.S around the time of the Civil War and became relatively popular among waterfowl and mammal hunters. The ancestors of this dog breed are Irish mixed dogs, Old Spanish mastiffs, poodles, Portuguese water dogs, and South Country mastiffs. Thanks to the convergence of many great advantages of the ancestors, the Irish Water Spaniel is smart, dynamic, proactive, and humorous.

This breed first appeared in England in the 1870s. This is one of the top retriever breeds with plenty of outstanding strengths. Their ancestors were the wavy-coated retriever, the St. John’s water dog, the mastiff, and the settlement dog.

They are extremely energetic, loyal, and clever dogs with intensive duck hunter skills and good loyalty.

The Standard Poodle was a sport dog and was also the largest poodle in the 1400s. This breed originated in France but then developed and evolved in Germany. In fact, the breed’s name stands for ‘’pudelhund’’ in German.

It also possesses great intelligence along with an extremely special plumage. The thick coat around the body and head always helps it keep warm and withstand harsh conditions well.

They said that the Nova Scotia duck hound works well as other traditional duck breeds. However, its role has changed a lot to date. Scotia once served waterfowl hunters by running and jumping up and down the coast to attract waterfowl. When these birds fall into the sights of their owners, it will be much easier to shoot them down. (I recommend you should bring the best american made rifle scope in duck hunting. It will help you.)

This is a pretty small retriever and weighs just under 50 pounds. Nova Scotia Duck Tollers have a waterproof double coat, which makes them tough in cold and harsh climates.

Above are the top 10 of the top Duck Hunting Dog Breeds in the world. They all have the advantage of being extremely intelligent, active, alert, and loyal. On top of that, they are the result of selective breeding from many good species. You can keep them to hunt with you or keep them in the house as pets.