What Is Different Between Ar15 Vs M4?

Being lightweight and having massive damage, the AR15 has become one of the most popular self-defense weapons for millions of people in the United States, especially American households.

Meanwhile, M4, an impressive version of M16, has been widely used in the military. These two weapons have several similarities and differences as well. If you desire to explore how Ar15 and M4 are similar or different, then don’t miss the exciting features shown below.

Each type of weapon came into existence in their own way and has experienced a long history of development before they perform well as the way we can see today. First and foremost, spend a little time learning about the development history of Ar15 and M4.

Ar15, also known as ArmandLite Rifle-15, was created by ArmaLite - a small company in Hollywood in the late 1950s.

After that, because of some financial issues, in 1959, ArmandLite sold the Ar15 model for the gun manufacturer named Colt Firearms. Immediately after this event, the original AR15 was significantly improved, leading to the coming of M16.

With significant advancements in design, at that time, the new version of Ar15 gained in the popularity in the American military and began to be in production in large quantities. On the other hand, different from the Colt, another manufacturer called Bushmaster produced variants of Ar15 as civil guns.

Until now, apart from Bushmaster, many other manufacturers such as DPMS Firearms and Stag Arms are also successful at producing kinds of guns modeled on the original Ar15.

Related: You own AR 15 rifles and want to find optical accessories for them? Let’s read my recent buying guide about best scope for AR 15 here! 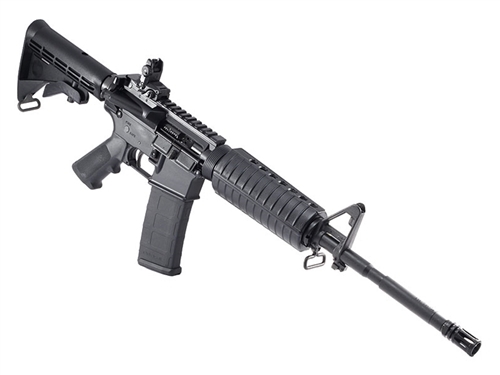 M4 Carbine - the best choice for military use

M4, or M4 carbine, can be regarded as a considerable improvement over M16, which is created based on the prototype of Ar15. Logically, we can say that M4 took long strides compared to Ar15.

In the late 80s, after having gone through numerous wars, the American military realized that the area for fighting was increasingly narrowed. Even at times, it was only around 200 square meters. For this reason, the American troops badly need the guns that are shorter and lighter than M16. As a result, M4 was born to meet this demand.

This weapon comes with shorter barrels than M16 and several other parts are reduced in weight. From the mid-90s, the U.S military officially used this version.

Any Similarities Between Ar15 and M4?

M4 is a variant of Ar15; therefore, it comes as no surprise that these two guns are quite similar to each other. Then, keep reading to explore common things. 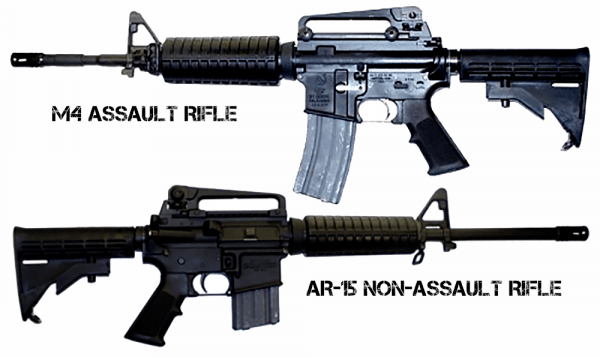 The first common point is that they have the same place of origin - it is America that provided us with such powerful weapons.

Quite a lot of parts of Ar15 and M4, from the internals to the externals, shows a remarkable resemblance.

Regarding the internal parts, receiver internals, charging handle, bolt carrier group and trigger assembly are similar in both weapons.

About the externals, handguards and rail systems come with some similar points.

What Is Different Between Ar15 Vs. M4?

As said above, there are a lot of similarities between Ar15 and M4, from history to structures and functions. That being said, we still can find out some differences between them. Let’s explore right now!

The first different point is that Armalite Ar15 is classified as an assault rifle while M4 is a selective-fire carbine.

In terms of length, because of military-related demand, M4 is designed a bit shorter than Ar15. Going into details, M4 Carbine is 33 inches long while 39 inches is the length of Armalite AR15.

One more special point about the barrel of M4 is that its cut is shaped an hourglass. Thanks to this feature, soldiers can put grenade launchers into this cut.

The difference in barrel length, in particular, the barrel of AR15 is longer than that of M4, leads to the fact that the AR15 also has a longer gas tube than M4.

Due to this feature, M4 has some problems related to the reduced pressure. To solve this problem, M4 feed ramps must be adjusted and improved to ensure the proper operation of the next round.

Velocity and effective firing range are also some other factors highlighting the differences between both guns. Particularly, with 5.66 mm ammunition, Armalite Ar15 features an effective range of 500 yards (equivalent to 457 meters) and has the velocity of up to 3,300 ft/s (1,006 m/s). It’s amazing!

This number is a little bit different compared to that of M4, whose effective shooting range gains 550 yards (equivalent to 500 meters) and velocity achieves 2,970 ft/s (910 m/s).

Last but not least, the most notable difference is permission for using these weapons. The civilian AR15 is allowed to use in the community for various purposes including hunting or self-defense.

In contrast, as mentioned above, M4 is only for military use. In other words, in civilian life, you almost get no opportunity to approach this weapon.

Anyway, don’t be sad about that. Ar15 is powerful enough for you because it can cover almost all functions M4 brings. Then, buy an Ar15 rifle right now and enjoy your hunting journey at any time!

Both Ar15 and M4 are seen as great products from firearms technology. After reading this article, you certainly get more knowledge of the development process as well as outstanding features of these two kinds of weapon. They generally have many similar points but there are still a few differences.

there is so much wrong in this article….. i dont even know where to begin… its almost as if someone who is completely ignorant of this type of gun wrote this article… i guess thats why the term “urinalist” is common when referring to journalists who write about things they dont know about

@Eric, your comment was completely useless!… If you have a problem with the article, please specify what you believe is wrong, and provide some reference to back up your statements. Otherwise, you are simply bitching with your comment and isn’t helping anyone.