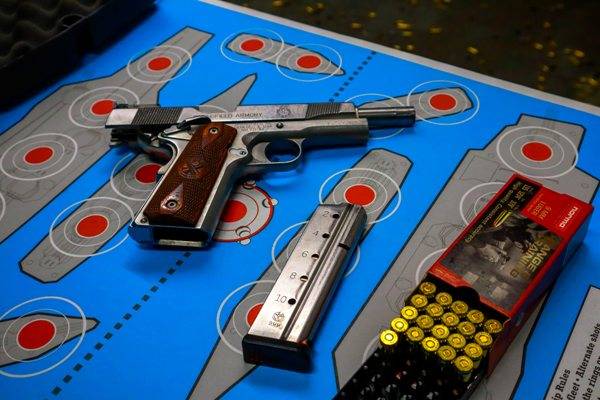 Rimfire vs centerfire – Who will be the king?  A repeated question among shooters looking for their “soulmate.”

We understand that the popularity of these two types of bullets has been stirring the handgun market, and you inevitably get confused about which one is better. Do not worry, as this post will help make your wonder clear. Scroll down and choose your mate!

Rimfire Vs Centerfire – The Difference Comparison

Besides considering rimfire versus centerfire design, you must view the relationship between the user, the gun, and the round. To be more specific, certain types of ammunition can improve or limit users’ experience.

The first difference we will review is the reliability of these rounds. The centerfire has rounds whose primer is completely separate. It means that the rounds feature one function solely, and they are far more reliable to use when compared with rimfire’s rounds.

Because the casing of the rimfire ammunition covers the primer bead, which easily leaves some manufacturing flaws on the bead, moreover, with this design, sometimes misfires may occur within those rounds. Hence, people tend to hunt and practice with rimfire rounds, while others use centerfire rounds for purposes related to military and self-defense.

The second consideration is accuracy. People evaluate the rimfire round whose accuracy is much more impressive, explained by less recoil caused while users are firing. However, the recoil causes some accuracy issues. The first problem is that expecting recoil sometimes prevents users from fixing their holds. Besides that, the shots at second or third times become less accurate due to recoil.

The next is the power factor. People use rimfire rounds for shorter distances. On the contrary, centerfire rounds are better at traveling long distances.

The last different point to consider is the impact of different rounds’ designs on the weapon itself. Regarding semi-automatic shotguns, the force used by centerfire rifles to reload the round comes from releasing gases. Meanwhile, the rimfire round creates recoil to reload the gun itself.

The edge lies in the center of the cartridge to ensure the proportionate amount of burn on the two sides. On the contrary, one side of the rimfire round tends to burn slightly faster than the other as you trigger the rimfire’s primer bead. This design causes uneven burn that consumes a considerable amount of powder used in one round.

Another distinction is an improvement in the centerfire cartridge shells, which are thicker than the rimfire. Users have to hit the cartridge’s edge to fire, which is one of the rimfire’s design flaws. As a result, the cartridge wall of the rimfire becomes weaker and weaker similar to the rimfire forces. It means that you can only use less thick materials so that the strike has the primer bead ignited.

However, you do not need to do this with a centerfire because its ammunition has a detachable primer located right at the bottom. With this design, the walls of the centerfire cartridge will be as thick as you want, allowing the bullet to contain more powder.

Centerfire And Rimfire – Comparison In Hunting

What about the hunting capacity of centerfire and rimfire, especially when rimfire does not have any edge? For small hunts, rimfire knocks down centerfire and becomes a king. Squirrels or rabbits are easy targets hunted under the shotguns of rimfire, which lack recoil and have cheap rounds. Meanwhile, the .22 round becomes useless in a bigger-scale game.

The bullet’s quality is another variable to think of. The soft metal rimfire bullets tend to easily spread and fracture after each impact. Therefore, rimfire bullets are more suitable for smaller games, and the weapons do not work for the larger game with larger animals.

Although some types of centerfire rounds work for small hunts, these bullets are still more expensive than rimfire ones. Despite that, we cannot deny that centerfire rounds are the king of large games. The reason is that the bullets offer users accuracy, higher speed, and stronger power to easily and quickly take down giant animals.

Which Ammunition Type Is Better?

So which one is better? It depends on your purpose of usage as well as the ways you use the weapons.

The higher velocities and pressures created by centerfire ammunition overall make the bullet a favorite option for self-defense. But there are several reasons that you should use rimfire ammo.

First of all, the rimfire handgun produces less recoil that allows shooters to be manageable. On the other hand, the centerfire seems to generate too much recoil that hinders users from handling or smoothly operating the gun. Hence, elderly users prefer rimfire ammunition to centerfire because of its reduced recoil. It cannot be an ideal option, but it is better to have a rimfire rather than not accompanying any firearm if you face danger.

The next is the rimfire’s smaller size, allowing more rounds than the centerfire ammunition with a similar function and size.

But if you are looking for a handgun that provides accuracy, speed, and power simultaneously, you can afford the more expensive bullets – the centerfire. Still, we recommend skillful shooters use centerfire ammo because of their ability to handle the recoil produced while firing.

Generally speaking, centerfire is much better thanks to its impressive function and design. If you still hesitate about which one you should buy, add a centerfire firearm to your collection, and you will have the best fun while shooting.

After reading the article comparing rimfire vs centerfire, we hope it helps you choose the right firearm based on your preference. If you have any questions, freely drop a comment in the box below. Or if you have used any of two ammunitions, share with everyone and us.

Lastly, thank you for your belief!