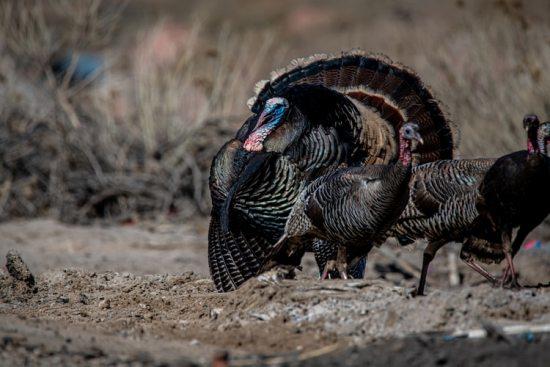 You have begun hunting for a long time, yet can you give us the answer to the question: “How long do wild Turkeys live?’’

It could get pretty confusing as many factors are influencing Turkey’s appearance and lifespan. But once you master this crucial knowledge, you could benefit a lot from it and succeed in hunting easier.

We did the concrete research with a series of appealing facts and tips about wild Turkey. To learn more, get the ball rolling!

How Long Do Wild Turkeys Live?

Typically, a wild Turkey’s lifespan lasts from 2 to 3 years. Yet minorities could live longer, up to fifteen years. You may figure out there is a big difference between the life expectancy on average and the longest years a Turkey could live for.

However, many hunters find it tricky to inspect how old a Turkey is. If you cannot predict a Turkey age, we provided you several factors influencing Turkey’s short or long lifespan. To learn more, let’s move on to the following section:

What Can Affect Wild Turkey’s Lifespan?

Overall, a wild Turkey can achieve the most extended lifespan under the best living natural conditions. As a result, towards hunting new ones, it’s vital for you to learn about decisive factors influencing Turkey’s age because you could know how to make your hunt more interesting.

Like the aforementioned explanation, you could determine the turkey’s lifespan based on several elements, as followed:

The environment always plays its role in Turkey’s lifespan because any animal needs shelter and food from the environment. Any modification associated with the food, habitat, age-class forest, or whatever causes the negative change in the shelter conditions and nutrition will affect Turkey’s lifespan. Also, increasing predation and disease put them at risk of passing away sooner.

It’s undisputed that weather could create a massive effect on Turkey’s survival and time of living. Good weather will undoubtedly boost the animal survival rate. On the contrary, worse weather conditions will create adverse impacts on Turkey’s lifespan.

Mankind And Risk of Hunting

The Turkeys who stay in some hunting fields obviously face the risk of being hunted with turkey mouth call. Hence, their lifespans are shorter than those in hunting-restricted regions.

Actually, male Turkeys are likely to live longer than their female counterparts. More often than not, gobbler Turkeys could live between 6  to 7 years. Meanwhile, the hens could live only an average of 2-3 years.

How Many Approaches To Determine Wild Turkey’s Age?

When it comes to wild Turkey’s age, you should learn about several terms involved in age classification. For illustration, a ‘’Jake’’ refers to an at least one-year-old male wild Turkey (also called a Male Juvenile). Meanwhile, Female Juveniles are often called “Jennies’’.

Besides, baby Turkeys have been given the term “Poult’’, which can be newly hatched. They are often a few months old. When a female Turkey hits adulthood, people call them a ‘’hen’’ and a male one is known as “toms’’ or “gobblers’’.

We have just handed over to you some interesting facts about Turkey. But how to identify their age? There are four ways (4 distinct characteristics) to determine how old a Turkey you already shot or are about to trap.

They can be indicated clearly as the table below:

How to Identify The Spring Gobblers’ Age

Tail When Fanned Out

A Jake often has the outer feathers shorter than their middle feathers. However, both of their feathers have the same length as one-year-old Turkeys, consisting of their fan.

It’s easy to recognize Turkey’s age based on their beard color: those older often have black-tipped beards, while a one or two-year-old Turkey often possesses an amber-tipped one.

A Jake would have a beard between 3-5 inches long. Meanwhile, a two-year-old has only a 7-to-9 inches beard, and the older one is more than 9 inches, yet this is often worn off due to the ground.

There are 4 popular methods to determine Turkey’s age.

Most hunters find it so interesting in every upcoming spring Turkey season. Once they hit the target (hunted a Turkey), hunters would feel cheerful and often guess the animal’s ages.

Via our topic of ‘’How long do wild Turkeys live?’’, you now know another intriguing secret about such an exciting bird. Let’s share with your hunting team members what you gained today. We hope that you will get more significant achievements in your hunt. Any questions, ask us at once via this comment box below. Your thoughts are much appreciated!