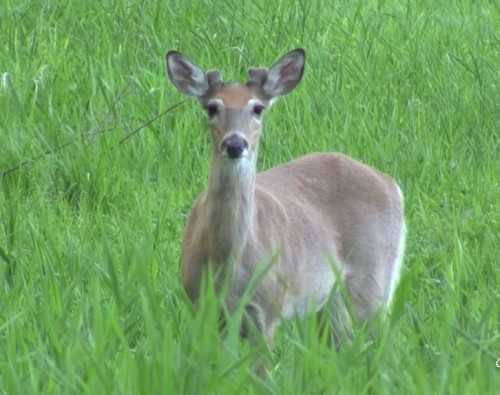 It is extremely beneficial for hunters to understand the reproductive process of a deer.

This article will show you the gestation period of deer and the useful knowledge for hunting. Let’s get started!

How Long Are Deer Pregnant?

A doe will start to give birth later 180 to 200 days after becoming pregnant. It varies per species, but on average, for 201 days, a female white-tailed deer is pregnant. The gestation cycle of female deer is dependent on species, season, and other factors.

Initially, the doe would only have one fawn. In the years following her first birth, the doe could give birth to two, three, or four fawns on rare occasions.

Before going doe hunting, particularly after the rut, make sure you are familiar with your state’s hunting rules and restrictions.

Since there can be instances when hunting a pregnant doe is prohibited! To prevent hunting for pregnant deer and breaking state law, you should be aware of their appearance and behavior.

Because of her size, it’s difficult to detect if a doe is pregnant.

Unless you are sure how to distinguish, look up as much information as you can about their behavior and traits until you are certain, especially if shooting for a deer that is pregnant, is prohibited in your field.

Why Is The Rut So Important To Hunters?

The rutting season for deer spans from the middle of October to the beginning of December, and their behavior starts to change. So, for hunters, it might be the perfect time to start hunting.

This time bucks begin to mingle so the doe can see the antlers. And the doe is also eating well in preparation for pregnancy. In fact, you will often notice that doe look their best in the fall.

And in contrast to prior seasons, during the rut seeing a doe usually signifies a buck is close by.

So hunting with Ar-15 and best scopes during this phase requires significant knowledge about deer behavior. But it is also easier to catch as males are more active and walk more in daylight and wander off around.

One more note is that during this period, evening hunting with night vision scope is the most productive because at this time deers will start going out to find food.

What Happens In The Rut?

What happens to male and female deer before mating?

For female deer: the female estrus period is quite short, and it starts in the fall, from October to December, their tails turn flat and regular urination is a sign of doe in estrus, pre-mating signs in doe.

For male deer: They begin rutting activities at this time, leaving marks on the ground or tree trunks and branches to indicate their state.

Scrapes and wallows are shallow pits dug by male deer, urinated on them, and then rolled around in the mud to cover themselves in it, which are examples of “rut indications.” The antlers of a deer are rubbed against branches and tree trunks to remove the velvet that may cause them to tear.

During the seeking phase, bucks start to determine the general location of females to start the process of mating.

Process of mating: Mating takes place between October and November. Buck tries to care for the doe and approaches her as much as she allows. The buck stays with the doe for 2 to 3 days in some species.

A fascinating fact is that when a buck discovers a doe in peak estrus, he will not allow other bucks to approach her. More bucks will approach a doe who is going through estrus for the first time.

If the doe does not become pregnant after the first mating, it will prepare to mate again after 28 days.

When Is The Best Time For Hunting?

As previously mentioned, rutting season is the best time to go hunting since young doe and bucks move around looking for suitable spouses.

It normally happens in the north during fall, just before winter. So it often occurs from October to December.

In the summer, the animals are not generally out. So, the suggestion is to start your hunt in October or February depending on where you live.

This page provides you an answer to the question: “How long are deer pregnant?” And now you are aware of the deer breeding season as well as the stages of pregnancy.

You will probably be surprised to learn that the gestation period has a significant role in determining when you should hunt. And now you can plan your outings in the field to enhance your hunting abilities right now!

Thanks Kevin Cavallin for the image!